The elephants are making their living by their performance 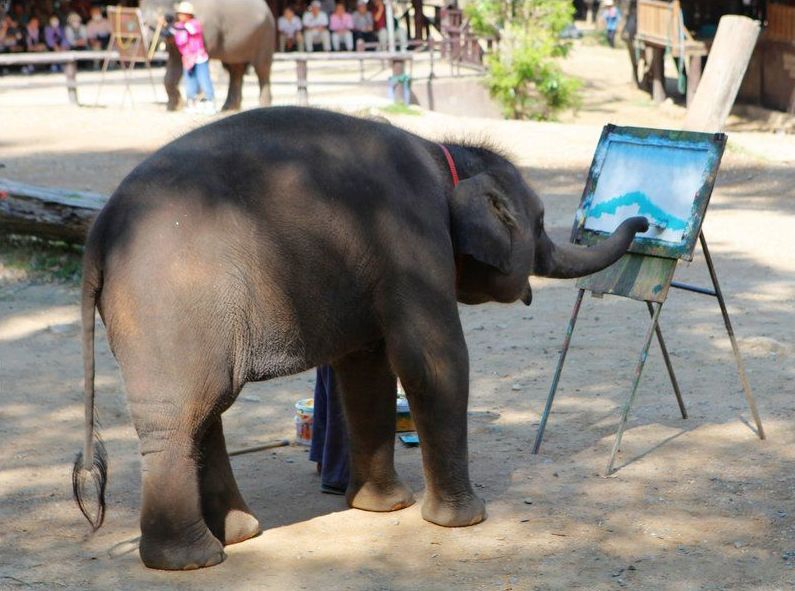 The elephants are making their living by their performance

Thailand has the good name of an elephant country, elephants are regarded as national treasures of Thailand, elephant is the patron saint of Thai. Thai see simple and honest, docile elephant as a symbol of their honor, dignity and strength.

In ancient times, like the tanks of modern warfare, the elephants followed Siam soldiers to fight against enemies on battlefields; afterwards, the elephants were trained to be used as lumbering porters for a time; since last century, much of the virgin rainforest has gone, the Thai government banned logging in order to protect forests, thousands of elephants were laid off. The elephants were forced to learn painting etc eighteen skills, went on their acting career path. 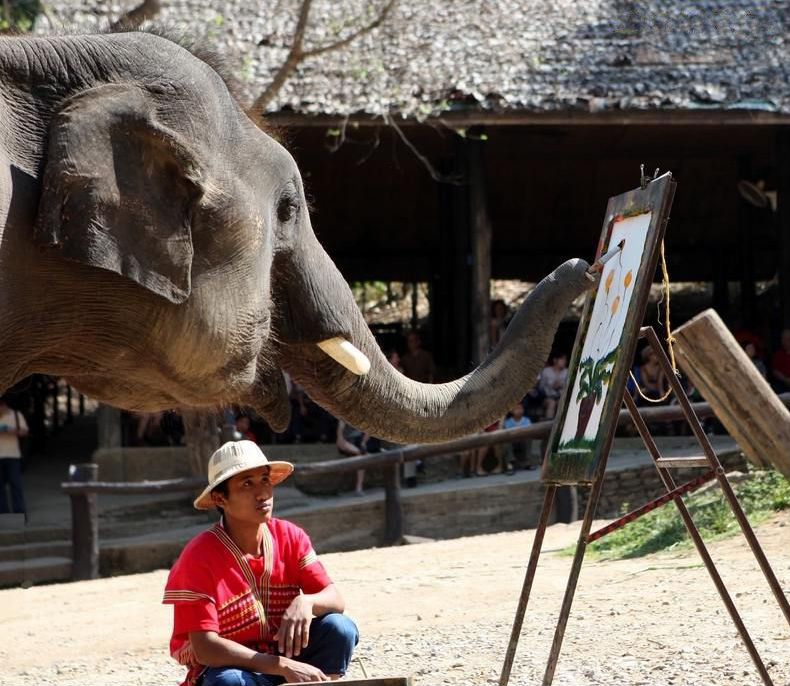 An elephant is painting. In a moment, a wilderness of garish patterns appear on drawing paper. 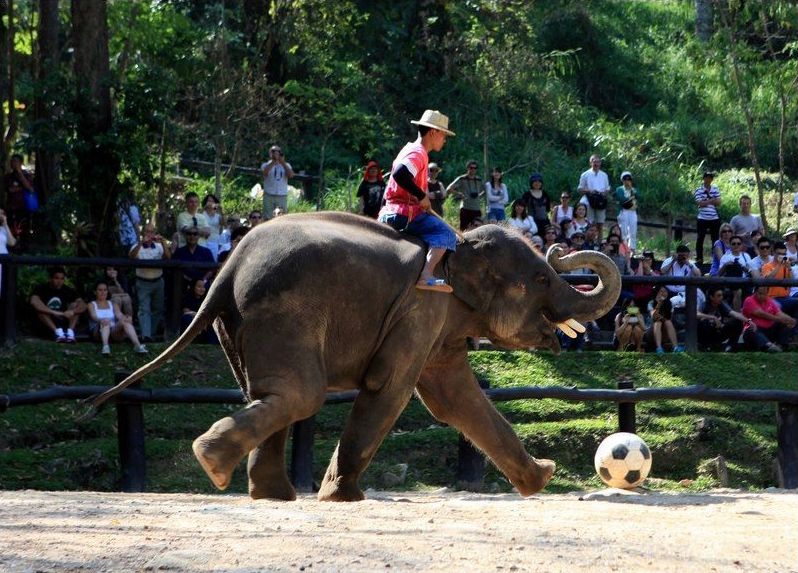 At the most exciting penalty kick, the elephant starts, using a short run, abruptly stopping; it dribbles past the goalkeeper and scores a goal. The elephant performance draw applause from the audience. 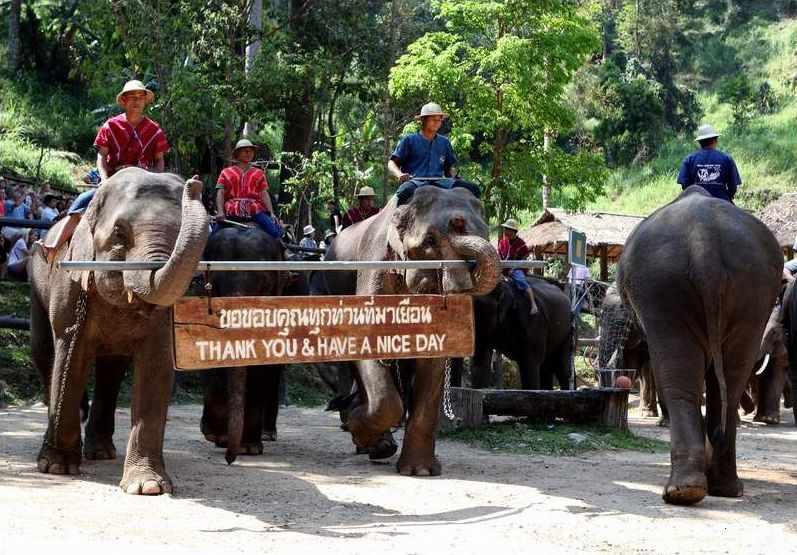 The elephants are carrying out various acts. 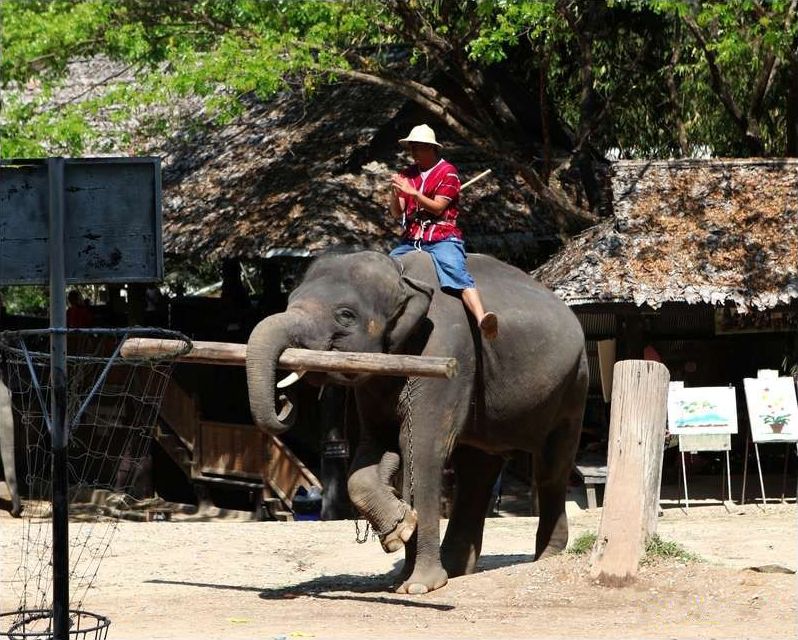 The elephant is moving logs. 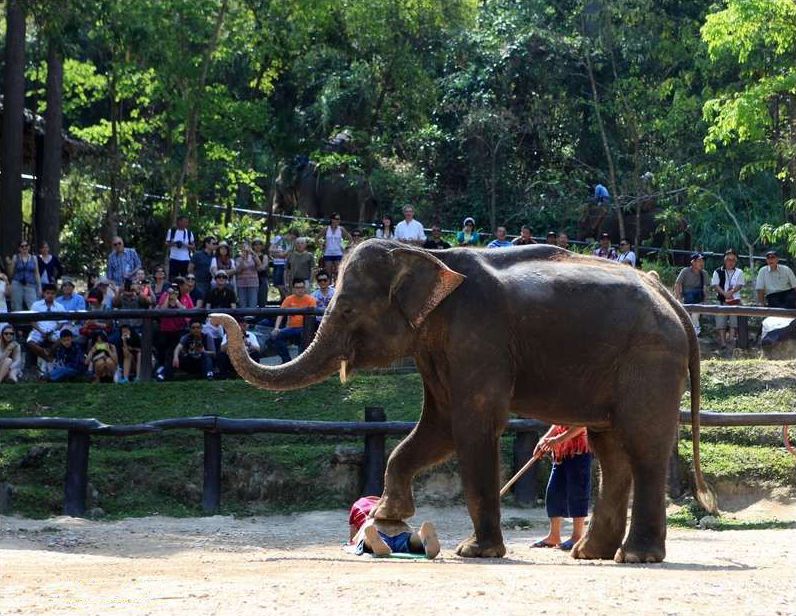 An elephant massages the man using his foot, very gentle. 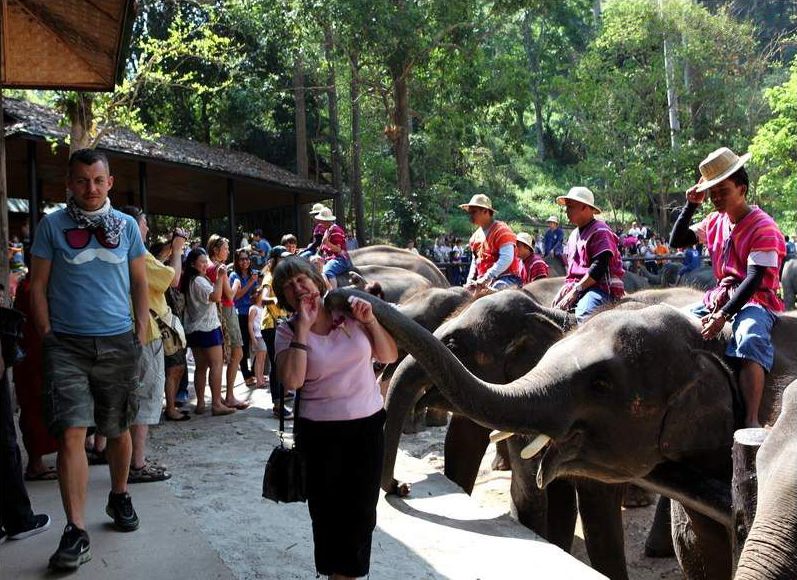 A elephant uses his trunk to kiss a woman. 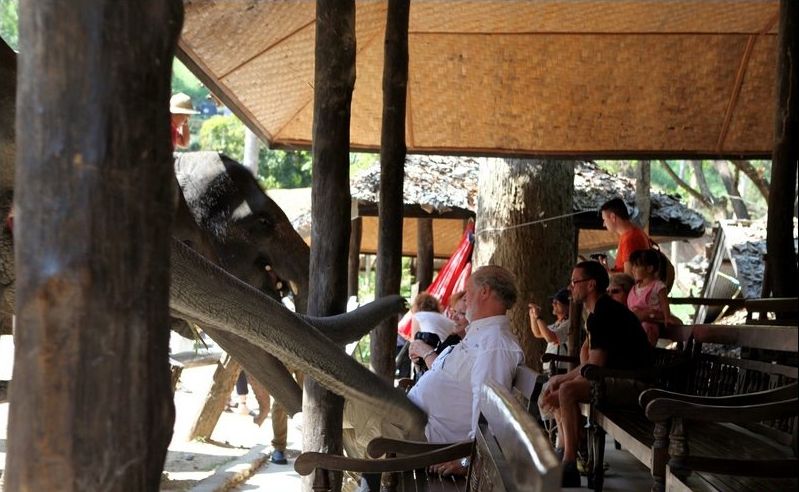 The elephants use their trunks to communicate with people. 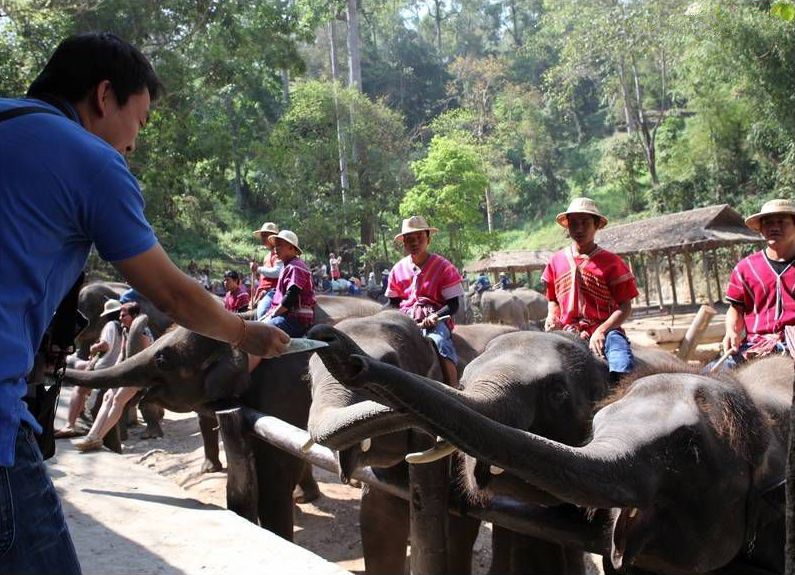 The tourists usually leave a tip for the elephants after the performance. 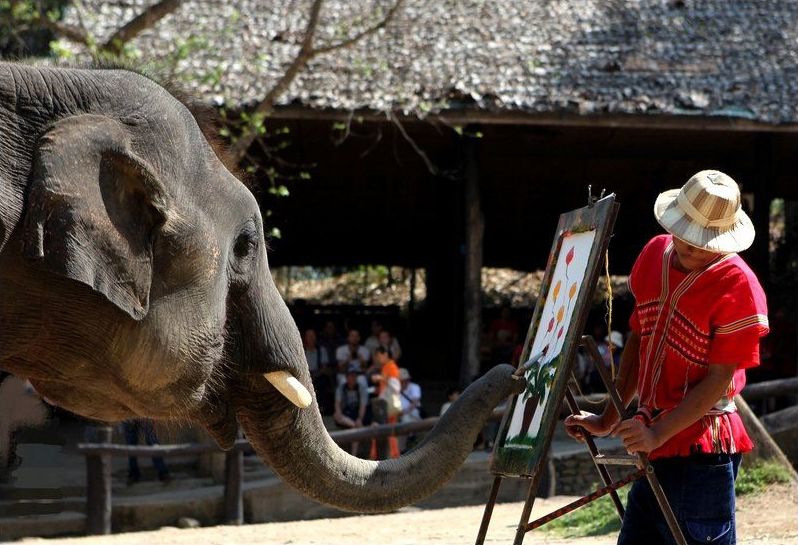 You see, his strokes are so powerful that the trainer supports the wooden easel firmly with his both hands. 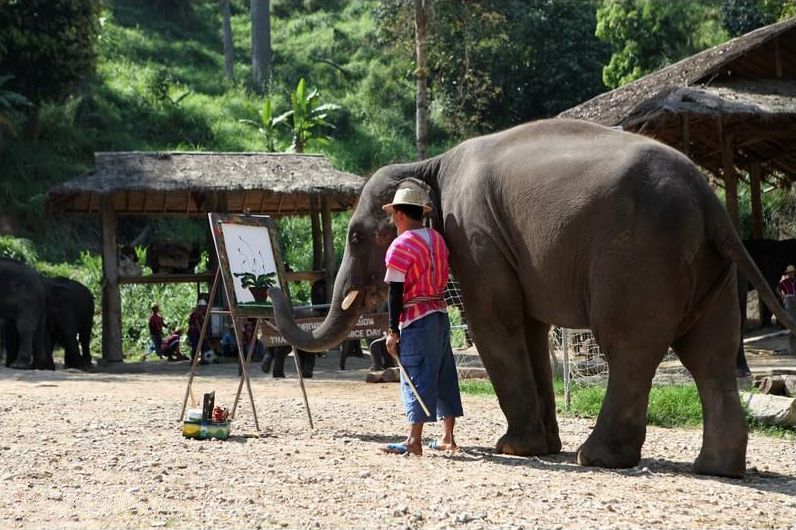 In the open square, five elephants scatter in different locations, meanwhile they use their trunks to rolls up their paintbrushes, paint dipping, they smear the pigment on the canvas kissingly. Sometimes they “stop trunk” and think deeply, some times they take up the writing brush and dipped it in black ink, some times they wave their trunks towards the tourists and give thanks to the tourists, the elephants are awfully busy at the moment. 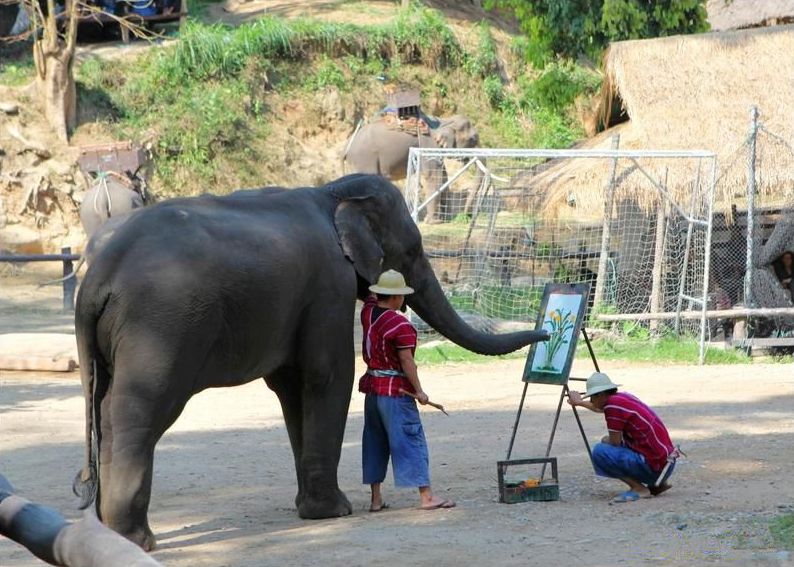 The elephant is dipping colours step by step as if it has known how to paint this picture. A few minutes later, a lovely picture comes into sight bit by bit in front of the tourists’s eyes.

There are watercolor paintings, landscape paintings and abstract paintings, each drawing seems like something out of a real painters. All audience are amazed by the elephant’s works. Each painting of the elephants costs two thousands baht. 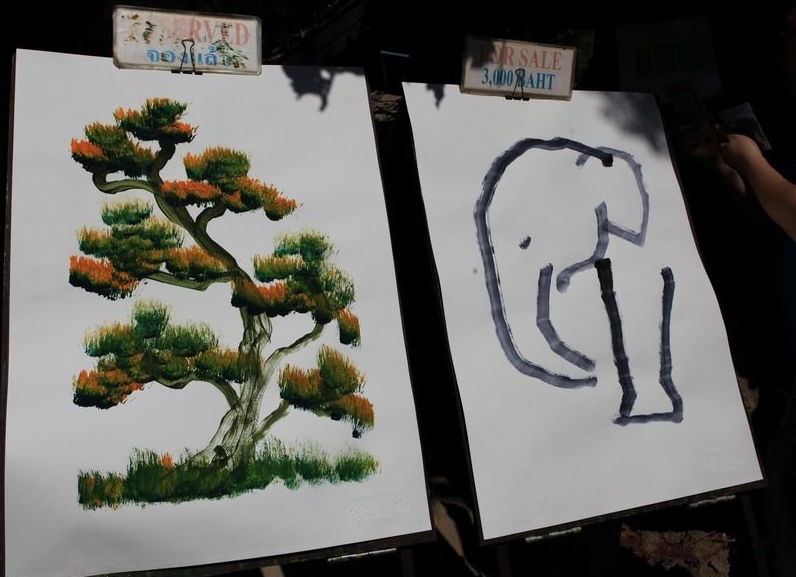 Every painting of the elephants costs three thousands baht. On the right is the elephant’s self-portrait. 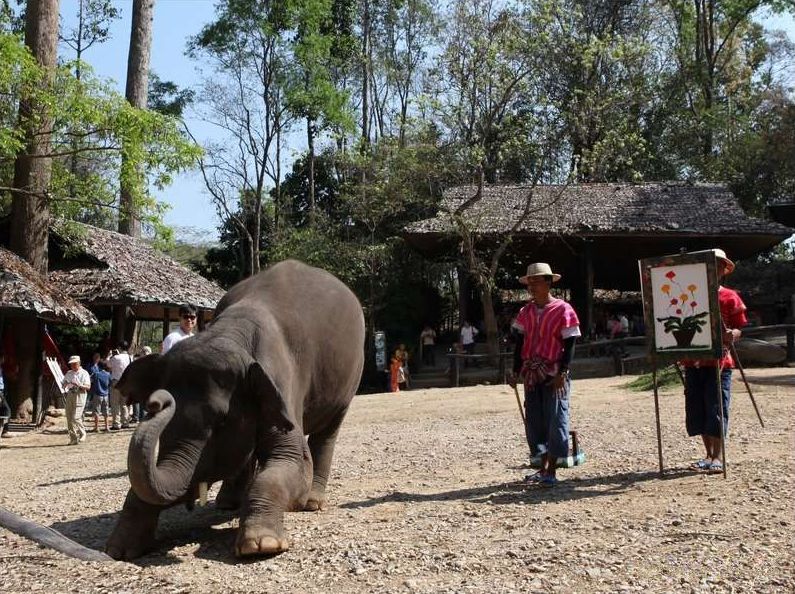 When the elephant finishes the drawing, everyone applaud, the elephant is so happy that it gives the spectators a kowtow. 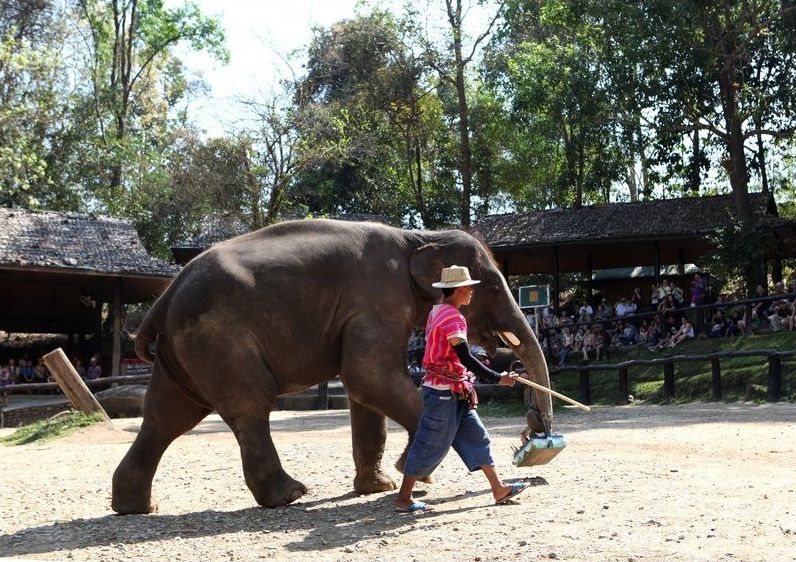 The elephant snatches up his paint box with his trunk and leaves the stage. 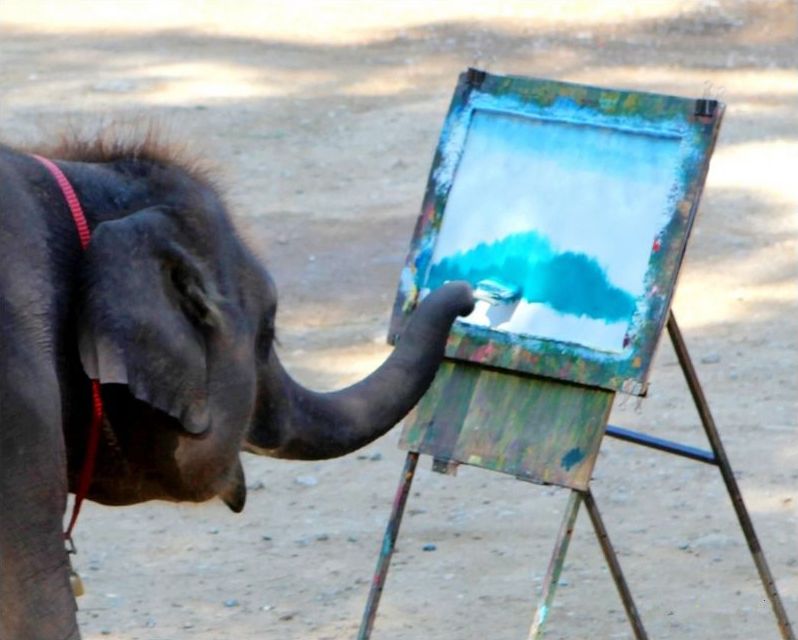 A baby elephant starts from doodles like a kid, his works is passionately adored by a lot of fans.

The baby elephant doesn’t like to draw, but he is to make a living, he is reluctantly painting a picture. The audience will forgive him and cheer for him. 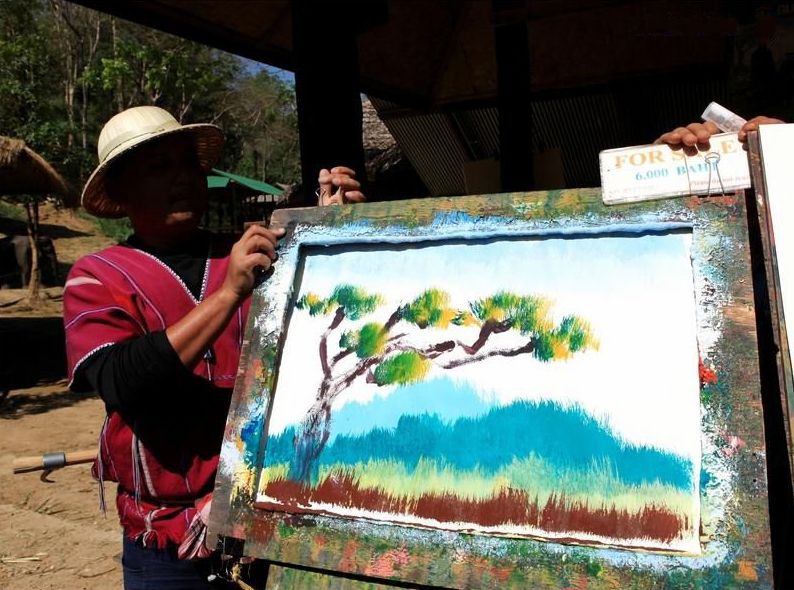 This is the picture a baby elephant painted, it is the most expensive in all these paintings (six thousands baht). One is that the picture is very beautiful, the other is that people want to donate money for elephant training school. 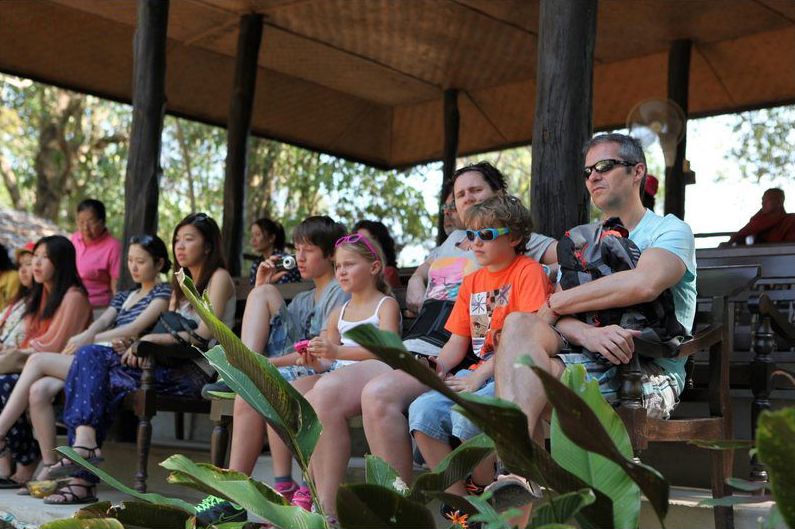 Many people come from great distances to see the elephant perform.