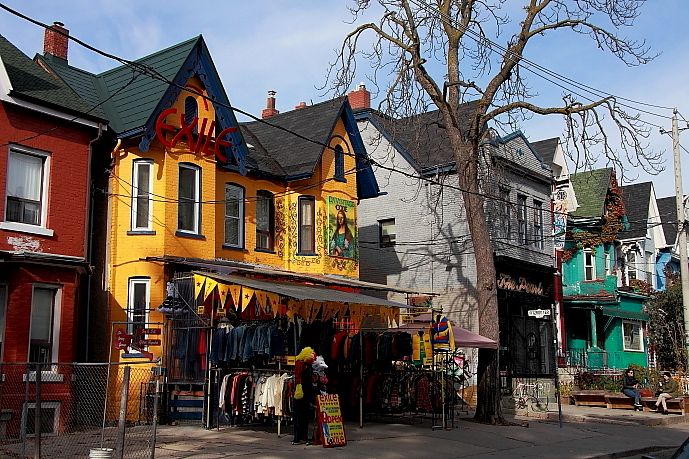 Kingston Market is rather famous in Toronto. This had been the earliest richer suburb in Toronto, it wasn’t until the 1880s that Kingston was turned into the concentration of people belonging to different classes. From that time, the English emigrants chosen British names for here’s streets and alleys, including Kingston Market.

The beginning of the 20th century, those early the English colonists, once flush, began moving to a more spacious new residence, But Jewish immigrants from Eastern Europe started to move in here. Different from the mainstream store sales, they began to follow their traditional, running their stalls in the front and at the back of their house. From the 1920s to the 1950s, eighty per cent of Jewish in Toronto clustered in Kingston Market.

Meanwhile Kingston Market began to be very avantgarde, which has been proved by the female nude models hung on houses.

The street of Kingston Market is not long, it is basically a Z-shaped block, shops, coffee shops, greengrocers, fish store, butcher shop one by one, murals filled the streets, a color grassy car still parked at street junctions, I estimate it won’t drive through the red light.

It is said that there are too many east Europeans here, once again meet by chance, the young couple has distinctive and attractive temperament, I’m absolutely confident that they must have come from Eastern European States.

I walk around in the streets, photographing, I go into a corner store. After one hour, I notice there are more people on the streets.

A fantastic love story on the wall.

Their love story in the street.

A picture of the multiracial street life in Toronto.

The electric theatre has opened so early.

The devil stands at a store doorway, a timid person must be scared off.

The singer’s exaggerated facial expressions and her great hand.

Colorful graffiti art painted on the walls is very exciting.

Toronto mayor is on film, it is said that he is a strong character.

It is a copy of Mouth of Truth.

At the corner of Kingston.

Leaving the nostalgic place, I will pass into Toronto in no time.

The narrow streets, charming Victorian houses, full of graffiti-covered walls, the image I hold in my mind, I always have a feeling that I have a look around Nanluogu Alley in Beijing.