The story of Chinatown in Singapore 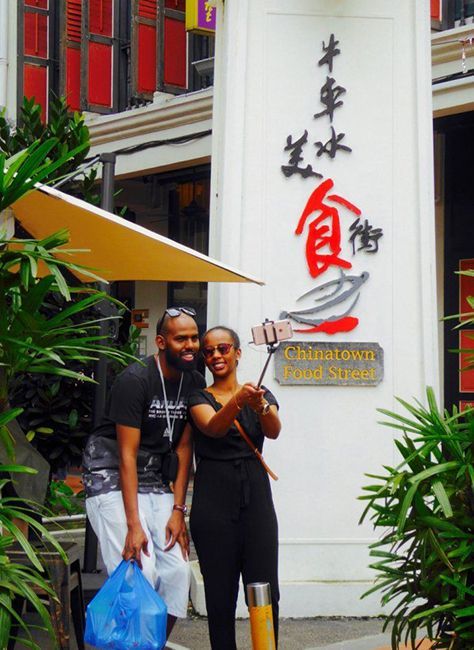 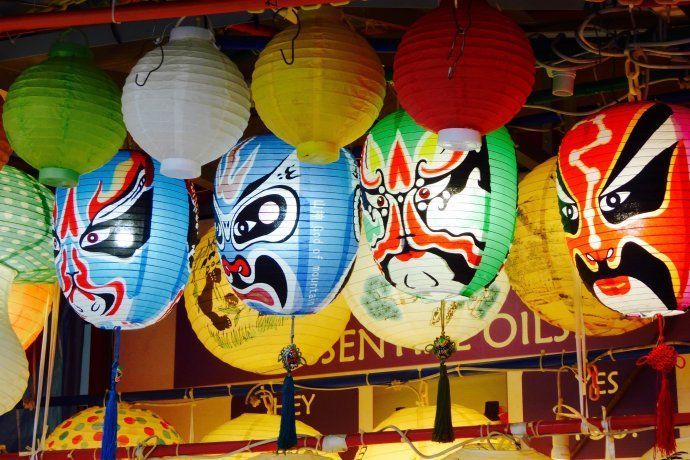 Each time I go to Singapore, I like to stroll around Niu Che Shui. I can not only experience Singapore folk customs, but also taste delicacies from Singapore’s Chinatown. But what you may not know is that there are two oldstreets which held those stories lurking in Niu Che Shui.

Chinatown in Singapore is named Niu Che Shui, the origin of this name reflected a piece of history of overseas Chinese in those years. At that time, overseas Chinese who lived in Singapore had no running water, so they sent water by bullock carts every day, it was heavy traffic on the street. As time passed, people called it Niu Che Shui. Today Niu Che Shui has become a collection place for Chinese Singaporeans, there are all kinds of snack food in China, the night market is ablaze with light and noisy with voices, just like temple fair. 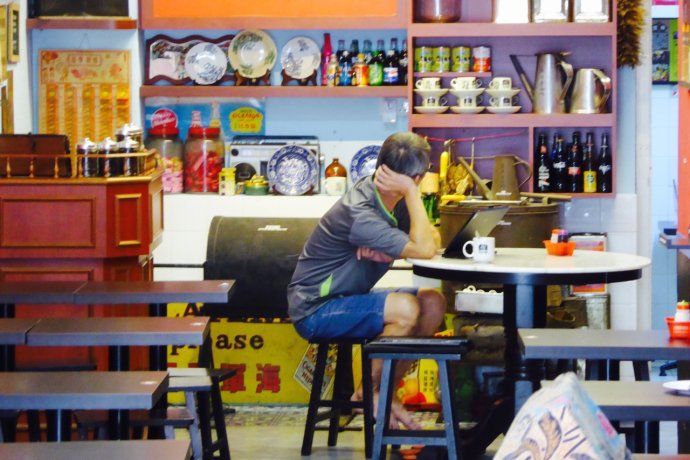 The general area of Niu Che Shui, north to Singapore River, west to New Bridge Road, south to Maxwell Road and Kreta Ayer Road, east to CecilSreet. Whenever you come to Niu Che Shui, the sidewalks are bustling with people, not just for overseas Chinese, but for numbers of foreigners love going to Niu Che Shui as well, they come here to feel the folk custom in the Chinese-speaking world. 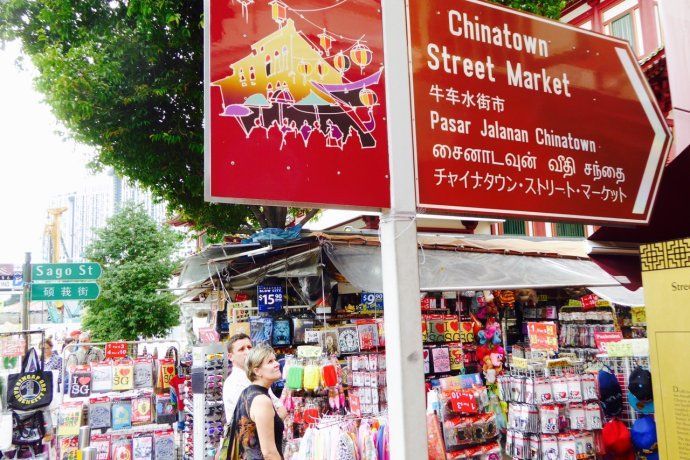 Early in 1819, to develop Singapore economy, the British Government enrolled large amount of labors from overseas, in a few short years, the population of Singapore was increased from several hundred people to tens of thousands of people, the number of Chinese workers from Guangdong Province and Fujian Province, who had more proportion in all Chinese laborers. At that time, Chinese laborers lived at the entrance to sea of Singapore River and did heavy carrying work on the docks. To sweep the dusty road, the big bullock carts loaded with water and washed it clear with water every day. 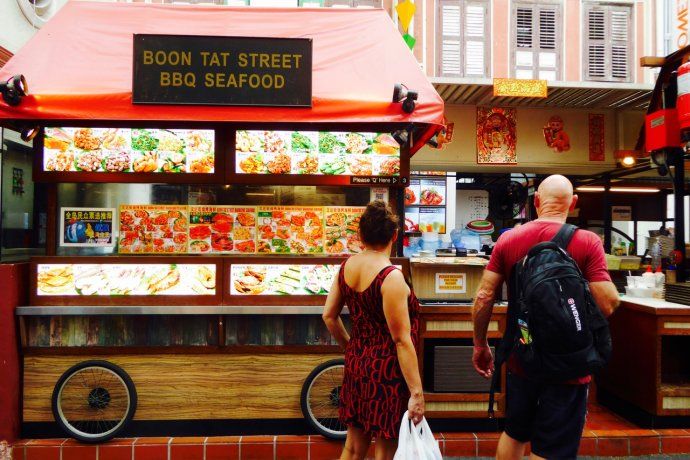 After the British Raffles landed in Singapore in 1819, more Chinese people came to here, most of them lived in Niu Che Shui. Raffles made Niu Che Shui designated as Chinese residential area. In those years, Singapore had no running water and all the water that the whole city needed was sent to downtown area by bullockcarts from outskirts, then water was transferred to various areas of the city from downtown area. Because Chinatown was located in the centre of Singapore, so the water-supply area, which people in Singapore sent water by bullock-cart was called Niu Che Shui. 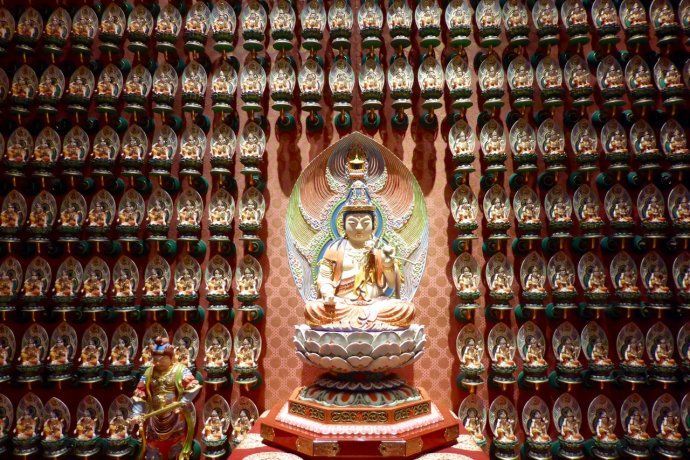 There is a sumptuous Buddha Tooth Relic Temple sitting in Niu Che Shui, founded by ShiFaZhao Buddhist master in 2002, a statue of the solemn Buddha was worshiped in the main hall of the Buddha Temple, also known as the future Buddha or Metteyya Bodhisatta. In the temple there are the buddha’s tooth and thousands of golden Buddhas. 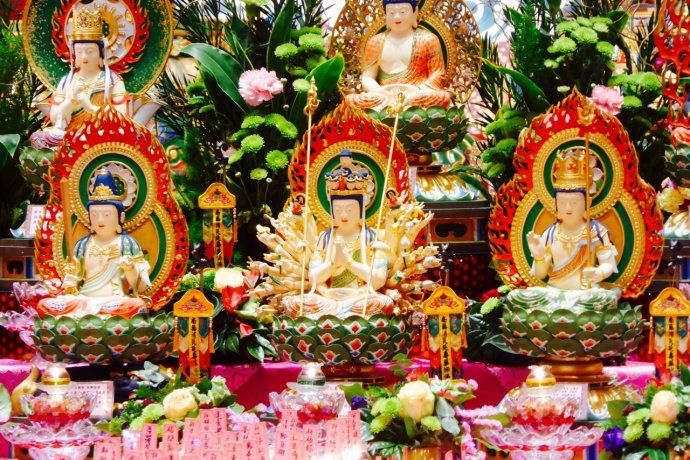 In the temple, religious men and women stream in and out every day, people come here and burn incense to Buddha for blessing their own family. Small and large gold Buddha statuettes are countless, an atmosphere of golden color is quite impressive. 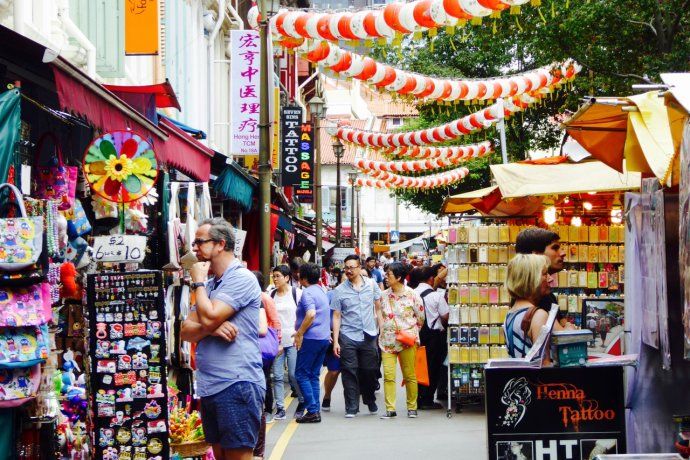 Niu Che Shui is inundated with various small shops, wandering in Niu Che Shui, I feel so affectionately. Niu Che Shui has gone through many vicissitudes, but overseas Chinese still remain true to the original that religious belief and family tradition. 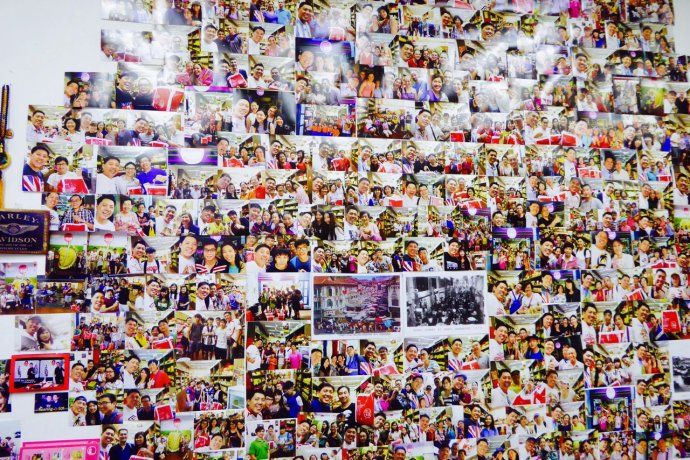 This is a durian fruit franchised store, the boss is obviously good at business, this store area is not large, in his store one of wall is covered with the pictures of the boss and his customers. Food products made using durian inside the store are various, and make us enjoy ourself so much that we forget to go home. 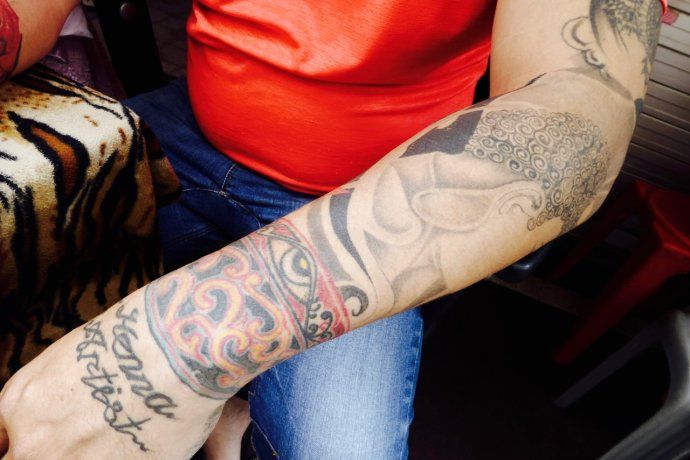 This is a tattoo shop, the boss is very enthusiastic and shows us a variety of tattoos in his arm, short-term tattoo can still maintains 2 to 8 days, the cost of tattoo is 5 to 20 Singapore dollars according to tattooed pattern size.

Nanyang Old Coffee, there is a sign in the doorway which said, “adhering to tradition, presents natural good taste of Nanyang coffee. Like the smell of Nanyang, like Nanyang amorous feelings, I stroll around Niu Che Shu, I feel Overseas Chinese traditions and fine food, my heart is full of happiness and joy. 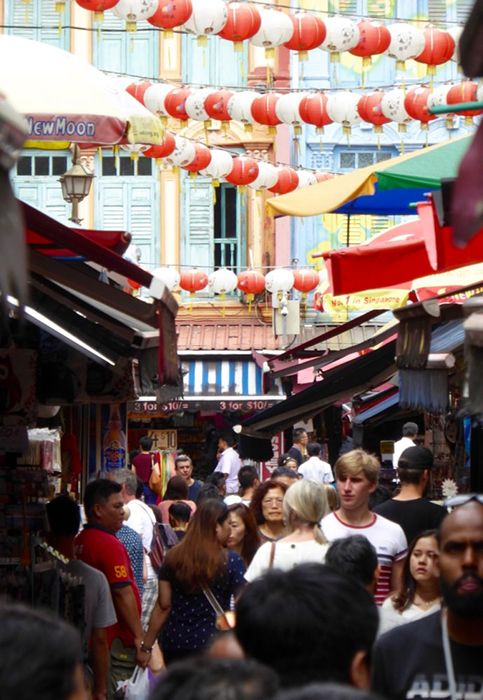 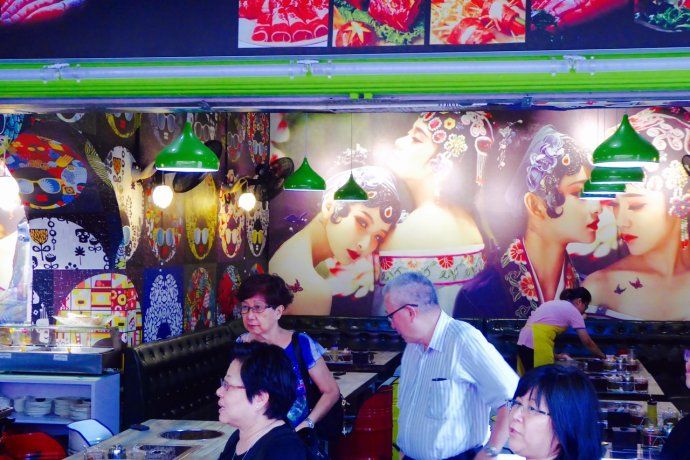 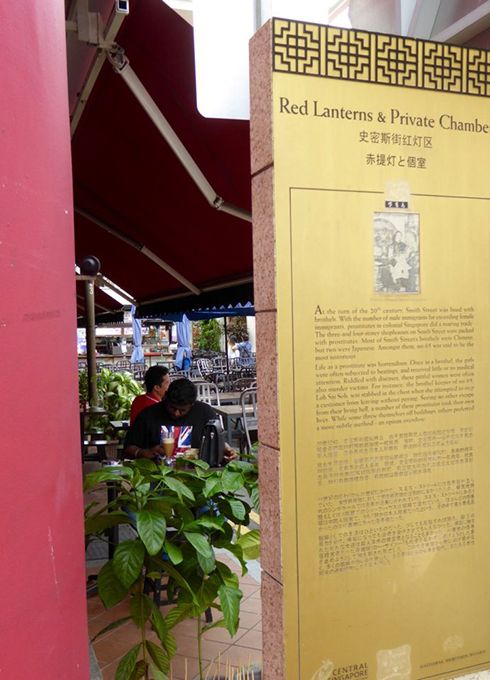 Smith Street’s red-light district located in the corner of Niu Che Shu, brothels were everywhere at the beginning of the 20th century, due to there are a lot more legal male immigrants of the time than female, so the prostitution was thriving in colonial Singapore. In those days, most of whorehouses were managed by Overseas Chinese, two whorehouses were managed by Japanese, prostitutes here led an extremely miserable life, few of them got out of there alive.

Not far away from Prostitutes Street was Street Of The Dead. Before, on both sides of the street were funeral parlors, at that time, the place Singaporeans lived was remarkably narrow, the house wasn’t big enough for the living person, let alone made room for the dead. So funeral parlors came into being, funeral parlors not only provided a dwelling-place for the dying men but also arranged appropriately their funeral. 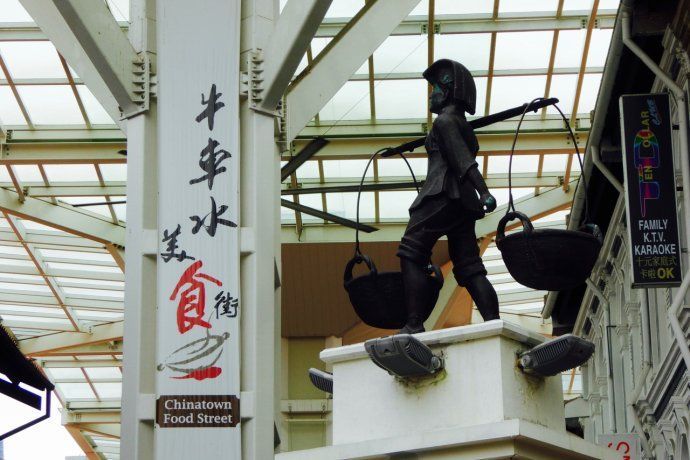 Still later, the government of Singapore banned brothels and funeral parlors here, Nowadays, we see that these two streets have been replace by the flourishing stores, at the corner of the street there are now two signs which tell us the stories that once happened here.

Hi! I’m Liuli who quit my office job to backpack for a year.

Latest posts by liuli (see all)

Join the fun. Get the best travel tips (including funny stories) right in your inbox. No spam.