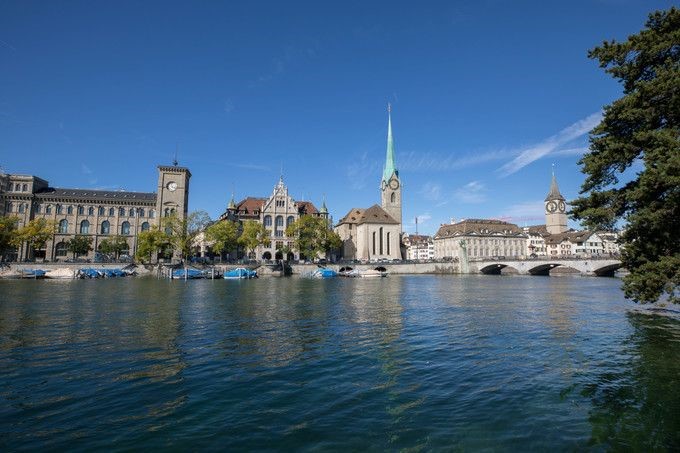 From the airport, we take the Swiss train directly to Zurich HB Main Station . The beer room in the station hall is prepared for the beer festival.

This is a TGV train, the French high-speed railway system.

Bahnhofstrasse is no noisy and no traffic in the twilight, we walk and chat along the way, in the roadside shop Windows are displayed a great variety of sneakers and other commodities attracting the passersby.

Johann Heinrich Pestalozzi was a pedagogue and educational reformer in Switzerland in the 19th century. In his early years, he received France influence of enlightenment thought, especially Rousseau’s thought, and benefited from some progressive professors teaching at the college. He determined to give up theological studies, at the age of 38, he began a programme to educate poor children, allowing the schoolchildren to learn by spinning and weaving in order to develop their self-reliance ability. He was convinced that everyone has an inherent developmental function and equal rights to education. His dedication to education, his persistent pursuit of educational innovation, he had many originality discourses in educational theory. He had not only made important contributions to the development of the world education, but also established a very respectable image for all educators.

The Limat River flows quietly, passing through Zurich from south to north, splitting Zurich into two areas and eventually slowly flows into Lake Zurich. Fraumünster Church towers up towards the sky in the night.

Located in the north-central part of the Swiss Confederation, Zurich is the largest city in the Swiss Confederation, the capital of the canton of Zurich, the political, economic, cultural and transportation center of the country, and the richest city in Europe. The city has been rated as one of the most livable cities in the world by United Nations Human Settlement Programme for many years. Zurich is the representative city of Swiss banking and one of the largest financial centres in the world. Because the headquarters of more than 120 banks around the world are concentrated here, more than half of them are foreign banks, so it is also known as the “European Billionaire City”.

Standing on the banks of the Limat River, looking at the scenery on both sides of the river under the blue sky and white clouds, we can see Zurich’s three most important cathedrals.

The church bell tower, built in 1534, has the largest church clock dial in Europe. The clock dial has a diameter of 8.7 meters, the hour hand is 3 meters long, and the minute hand is 4 meters long. This church bell tower is used to monitor the fire disaster. It is said that once fire alarm occurs, someone will put a flag in the direction of the fire to tell people the exact location of fire.

Frauenkirche is a Reformed Church, one of the 34 parishes of the Swiss Reformed Church in Zurich. The Reformed Churches formed one branch of the Protestant churches that broke from the Roman Catholic Church of that day. They began in the sixteenth century in Switzerland under the leadership of Ulrich Zwingli and John Calvin. Calvin’s teachings became the dominant and leading force in these churches as they spread across Europe, particularly to France, the Netherlands, Scotland, and, by the eighteenth century, to North America, Africa, Hungary, Indonesia, and many other parts of the globe.

Frauenkirche with a green roof and a slender bell tower is a representative Gothic architecture. The main architectural features of the church include Romanesque choir seats and a high-value transept. In addition to the largest pipe organ in the canton of Zurich (5793 pipes), there are many stained glass windows worth seeing in the church: including the glass windows on the north side of the nave painted by Giacometti’s cousin Auguste and the rose window on the south side of the nave painted by Chagall(Marc Chagall, 1978).

The predecessor of Fraumünster Church was a monastery established in 853 AD. At that time, the monastery’s power was large enough to appoint mayors and was in fact the city administrator. The power of the monastery gradually diminished in the 14th century. In front of the church, a statue of a man on horseback is Hans Waldmann (1435-1489) who served as the mayor of Zurich for many years. Standing in front of Fraumünster Church, we can see the landmark building the twin towers of Grossmünster church on the other side of the river.

Leaving Grossmünster, we walk along the river freely.

On the east bank of the Limmat River, an old man sits on a pillar and feeds the seagulls. Watching the seagulls around him are fighting for food, he is very happy! A few white swans and a group of ducklings float quietly in the water and enjoy themselves. This scene is particularly harmonious.

The Polybahn, also known as the UBS Polybahn, is a funicular railway in the city of Zürich, Switzerland. The line links the Central square with the terrace by the main building of ETH Zürich.

The funicular takes the passengers to the University of Zurich. We follow the tram lines and enter a teaching building. The exterior color of this building is very modern, and The huge exhibition hall shows aircraft engine.

This is the most beautiful teaching building in the University of Zurich, and the appearance of the building highlights European classical charm.

When we arrive at the University of Zurich, classes are over. So it is after school. Groups of students gather in the square in front of the teaching building. They sit on the ground and enjoy lunch and sunshine. The atmosphere is really happy!

In the square in front of the teaching building, there is a area that offers two sets of fitness equipments, organizers encourages onlookers to join, and the students are eager to try.

We walk into the teaching building and are really surprised by the scene in front of us. Here is like a huge palace. The Roman columns, statues, etc. are so exquisite. here is actually a school. Reading here is very happy!

The colors are lively and modern facilities are all available in terrace classroom. The students enter the classroom one by one, the course has not yet started! In addition, we come out of the terrace classroom to go into a conference hall or lecture hall, take our time, and don’t think about it, feel into it.

The corridor is brilliantly lit up, with tables and chairs around the outer perimeter, it can become a learning and reading place at any time. The learning environment is also extremely quiet and comfortable.

The circular corridor supported by the tall Roman pillars is a place for students to rest and chat.

This door is very old and delicate, I really like the beautiful pattern on the skylights.

Swiss Federal Institute of Technology in Zurich can also be translated as “Zurich Federal University of Technology” in Chinese, ETH for short. The Swiss Federal Institute of Technology was established in 1855 by the Swiss Federal Government for the needs of the country’s industrialization. It was the first federal university. The university started with a few disciplines such as industrial and civil construction, forest science, mechanical engineering and chemistry, and later humanities, society and politics were included. The school currently has 26,000 teachers and students from more than 100 countries distributed in 16 departments. The teaching and research fields cover architecture, engineering, mathematics, natural sciences, social sciences and management sciences. By 2006, 30 Nobel Prize winners including Einstein were born here. The school is also a member of International Alliance of Research Universities, the IDEA League and other international university cooperation organizations.

In the display cabinets at the door, the prototype for school buildings of all time tells its historical stories across the centuries.

There is nothing special on the outside of the teaching building, we walk in there, it give us unprecedented shock, we feel as if we walk into a palace in the Roman Empire in Italy. We are so excited.

The students are studying or discussing here, the whole hall is still quiet.

In a corner of the hall, there is an exhibit that looks like a bed. I don’t know its origin.

Many students sit on the windowsill and study on their own, they give us a novel feeling.

We visit this teaching building floor by floor as if we visit a museum, and each floor gives us a different but beautiful feeling!

Leaving the Swiss Federal Institute of Technology in Zurich, we arrive in another funicular station by tram. We take the funicular and get off at the second stop, which is the final destination. This is a wealthy area on the Lindenhof, overlooking Zurich. Various high-end villas have been built on the mountain, and the environment is elegant and tranquil. Let us also take this opportunity to enjoy the beautiful mountains and lakes.

We come down from Lindenhof mountain, we should go to the most beautiful Lake Zurich, we take the tram directly to the lake area. The blue sky, white clouds, sunshine, sailing boats, seagulls, green trees, lawns, everything is so beautiful! Locals take exercise and enjoy the sunshine with their children and pets.

At Zurich HB Main Station, I remember seeing a similar elevator in Stockholm, but I didn’t notice anything special about it at the time.

Today we are going to go back to Germany, our trip is coming to an end.

I’m Wangqing, and I help curious travelers have delicious adventures around the world.

Latest posts by Wangqing (see all)